Laurie Carney is a strategist, writer, editor and account executive in her professional life. She is at home with her husband Jeffrey, also a strategist and creative director/writer, and silly rescue Poshie, Bonnie (aka Golden Bear). She has four beautiful children now that her son and daughter are happily married and three tiny grands playing starring roles. Leaving no stone unturned, Beau is destined to be a rock climber or drummer. Henley—Henny Penny—has, at 2, fallen in love with airplanes and professes in baby staccato that she will fly Airbus. New to the scene, Palmer James (PJ) is sweet as candy and bright as sunshine. Competing for attention in these circus years, GB Bonnie has left her treehouse home for greener pastures and ground-floor windows. 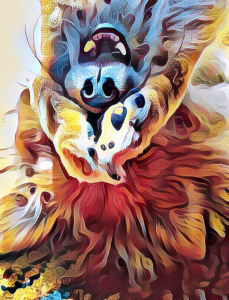 Laurie remembers vividly a childhood day when a distant, elder, female German relative placed a finger in the center of her brother’s back with the scolding, Stand up straight, young man. That event is an odd metaphor for the way she desires to intellectually, morally, emotionally and spiritually live her life. Standing up straight…deliberate about next steps, clear about purpose.

As a creative type, Laurie respects immensely that something beautiful can be created from nothing. She hopes for Juliet Rome readers to find that kind of joyful imagination around the topics of life and work and home.

In the event you are wondering, Juliet Rome is, simply, Laurie’s muse. Doesn’t everyone need to leave a little bit of the person they are behind for the person they wish to be? “Juliet” celebrates iconic style in everything from architecture, art, design, food and fashion to manners. She believes that less is more, and more should always only surround things that matter. She believes there are ancient arts that will become lost art if they aren’t elevated for the next generation.

Juliet loves order and spontaneity, in that order. Good planning facilitates everything.

This muse would not trade her oldest pajamas for silk on any day of the year, but longs to be classic in black all the days of her life. She loves decorum and avoids chaos when she can. At any tiptoe of it into her life she begins to dream that she is straining toward something—an event, a meeting, an important encounter—through a home and closet and personal relationships that have become the worst possible mess. She awakens each time to realize something important needs attention.

Juliet Rome is about pointing home and inspiring a beautiful, organized and uncontained life.